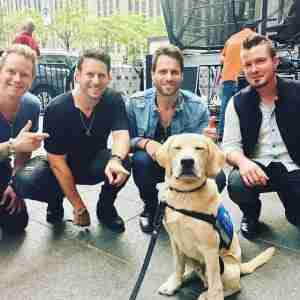 The members of Parmalee pose backstage with a service dog in training, Polaris.

Parmalee is a country rock band, composed of brothers Matt and Scott Thomas, their cousin Barry Knox and friend Josh McSwain, that originated in Parmele in Martin County. The group was formed in 2001 when the members began practicing every Tuesday and Thursday night in a barn they dubbed “Studio B.” Since then, Parmalee has gone on to produce five albums and has been featured on Billboard, AOL.com and Clear Channel.

It wasn’t long before the band members realized they needed to broaden their horizons outside of the barn in Parmele if they wanted to jump-start their music career. After traveling to different studios across the country, they settled in Nashville. They parked their RV in the lot of a local hotel, and they lived and worked out of it for a month. It also became the site where they recorded the demo for their first hit single, “Musta Had a Good Time,” alongside co-writer David Fanning.

After the president and CEO of BBR Music Group heard the song, he asked Parmalee to showcase their music for him in Nashville. To fund the idea, the group planned a brief tour in North Carolina. But the tides turned the night of their first show on Sept. 21, 2010.

As the four men were packing up their equipment after their performance, they were approached by two armed robbers, who put a gun to Matt’s head and demanded cash. The robbers fired shots, and Scott Thomas, who had a concealed-weapons permit, fired back. Scott was shot three times and sustained life-threatening injuries.

Despite this major setback, the band was not going to give up on its dream. By February 2011, after Scott’s 35-day hospital stay and collecting donations from the Nashville community and fans on Facebook, the band finally performed its long-awaited label showcase. Stoney Creek Records offered the guys a deal.

“Musta Had a Good Time,” released in 2012, was the band’s popular single from its first album, “Feels Like Carolina.” The song was No. 1 for four consecutive weeks on SiriusXM’s The Highway “Hot 30 LIVE” countdown, and it quickly became a Top 40 hit on country radio. The band’s second single, “Carolina,” reached No. 1 on the Country Airplay chart in December 2013. The group was recognized by Billboard and Clear Channel in 2012 as an up-and-coming group on the country music scene.

Be sure to arrive in time to check out the opening act OSMR, which stands for Old Southern Moonshine Revival. In May, Rolling Stone named the group as part of their 10 county artists you need to know and noted that fans of groups like Old Dominion and Zac Brown Band would enjoy their music.

Originally from High Point, the country-rock band made their Nashville debut with the release of “Can You Feel it Now – EP”. With two of the songs becoming “Highway Finds” on SiriusXM. Their song Waste Another Beer was their first Top 10 hit on The Highway and led to sharing the stage with some of country’s biggest names, including Blake Shelton, Thomas Rhett and Sam Hunt. In April, the band released it’s latest album, Sweet Life, featuring six new songs.