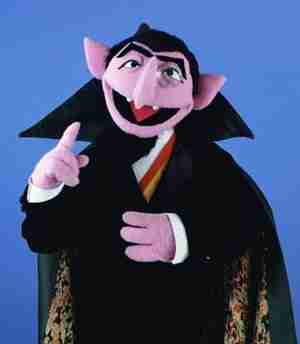 Count von Count was our alternate choice for counting people at the State Fair.

Every year, we get lots of questions about attendance at the N.C. State Fair. And every year, we base attendance figures on the number of admission tickets sold plus the count for children and senior citizens who get in free. But every year, there are days when we’d swear on a funnel cake that there are more people on the fairgrounds than the official numbers show.

The reason for that, of course, is that there are A LOT of people working or volunteering at the Fair, competing in livestock shows and other contests, or covering the Fair for media outlets. In the past, those people weren’t included in attendance figures. Well this year, we’re changing that. We’re making an effort to account for everybody, so that we can get a better idea of how many people were at the State Fair on any given day. That means including workers, volunteers and competitors in the attendance figures.

Someone (OK, it was me) suggested that we enlist the aid of a certain “Sesame Street” character known for his counting abilities, but wiser staffers prevailed and we’ve gotten help from eTix, the folks who handle our ticket sales.

One of the things they did was put bar codes on the badges issued to the media covering the Fair. Thanks to our intern, Paul (a.k.a. Bearded Lady), those bar codes have been loaded into eTix’s computer system. Each time someone wearing one of the badges enters the gates, the badge will be scanned and added to the daily count.

Gate workers also will be making sure they accurately count the number of children under 6 and senior citizens 65 and over who visit the Fair. Instead of just clicking a counter when these folks come in, the workers will use scanners attached to laptops to scan a bar code for these categories of fairgoers.

It should be noted that these changes will not affect our contract with Powers Great American Midways, the company that operates the carnival rides and games. Powers pays the State Fair a fee based on paid attendance, not total attendance.

We know some people may question our decision to count people working at the Fair in attendance figures, but it’s actually a common practice at fairs around the country. It’s not a stretch to think that once workers, volunteers and competitors finish their shift or show, they join the crowd enjoying the food, rides, entertainment and fun. They may not have to pay to get in, but they definitely spend money at the Fair.

Others may ask why we haven’t counted everybody before now. Well, without turnstiles, it’s pretty difficult to get an accurate count. Fortunately, ticketing technology has gotten more sophisticated, and that’s enabled us to undertake these changes. As ticketing technology continues to evolve, we’ll probably get even better at counting in the future.

Agriculture Commissioner Steve Troxler has made no secret of wanting to have 1 million people attend the State Fair. In fact, he thinks we might have reached that number already, but didn’t know it. Will we reach 1 million this year? Who knows? We’re just hoping that by taking these extra steps, we can get a better handle on, as Count von Count calls it, “The Number of the Day.”