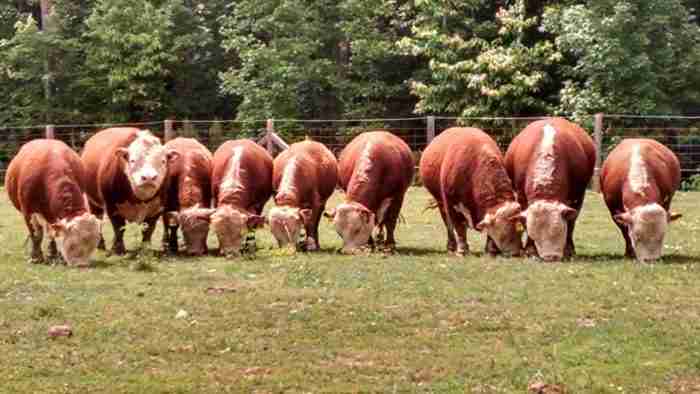 Miniature Herefords are smaller and weigh less than standard-size Herefords.

John Cooper’s wife, Yvonne, was the true spark behind the ribbon-winning herd of miniature Herefords at Spring Trail Ranch in Hillsborough. “My wife saw a story on Fox News in June of 2009,” Cooper said. “We ended up going to Nebraska and bought four heifers and bull the next month. We now have 70 cows.”

Miniature Herefords are often more like pets than cows. And, unlike standard cows where the recommended acreage is one acre per head of cattle, miniature cows can be kept two per acre. “Their moo is like how a dog barks and they’ll complain if you are late feeding them,” John Cooper said. “I think they are tamer than standard cows, too, even the bulls are pretty docile.” 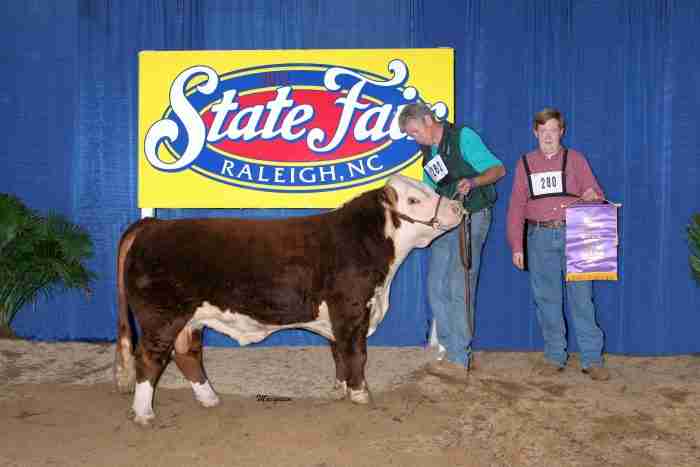 John Cooper and his first winning miniature Hereford. His herd, which he raises in Hillsborough, has grown to 70 head.

“We have animals coming from Maryland, Pennsylvania and Maryland,” said Cooper. The N.C. State Fair Open Miniature Hereford Show abides by the regulations and classifications provided by the North American Hereford Association. Cooper spends a lot of time getting the cows ready for the show.

“The month before a show we start tying the cows we are showing to a fence rail to tame them and get them used to being tied for long periods of time, since they will be on halter the total time they will be away from our farm,” Cooper said. “Initially, we start tying for about an hour a day and work up to about four hours per day. We will walk them on lead and stack them in a show stance to train for the shows.

“Grooming-wise, we will bath, dry and clip each cow twice before we go to the show,” he said. “Each time it takes about two hours per cow. At the show, we wash, dry and groom each cow each day. A lot of time goes into each cow.”

Cooper credits his winning streak to having cows with good genetics and physical characteristics. “Personally, I have a good idea what a good cow should look like and try to breed toward that end result,” he said.