Commissioner Troxler to defend his title Oct. 13 in the celebrity tobacco stringing competition 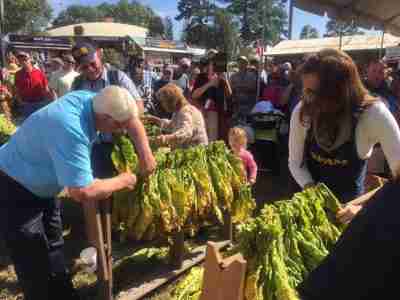 Having grown up on a farm in the Midwest, WRAL television anchor Lynda Loveland is no stranger to farm life. But tobacco stringing was a farm task she had never tried her hand at, until 2016. Last year in front of a friendly crowd of experienced tobacco folks, Loveland took on Agriculture Commissioner Steve Troxler in the first celebrity stringing competition.

Team WRAL, which also included producer Kelly Riner and guest hander and four-time champion stringer Sandy Jones, had a great cheering squad, but came up a little short in the competition. 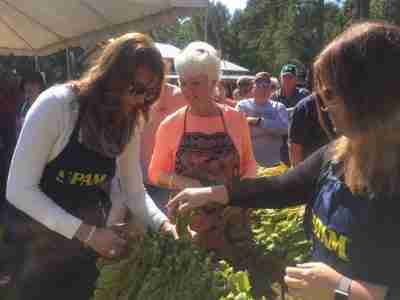 Fairgoers will have a chance to see a rematch between Loveland and Troxler on Friday, Oct. 13, at 1:30 p.m. in Heritage Circle.

“I look forward to defending my title, and I am also going to be watching to see which of my friends are cheering again for Lynda’s team,” Troxler said. “I thought a few of them might have cheered for me last year, but that was not the case.”

The celebrity stringing event is a warm up to the serious competition that begins at 2 p.m. where bragging rights and a total of $500 in prize money is up for grabs. Fairgoers interested in competing can sign up on Friday, Oct. 13, at the tent in Heritage Circle. You need to have a team of three, including a stringer and two handers.

Sign up to compete or simply check out this fun competition.

The contest is sponsored by the John Deere Ice Cream Boys.