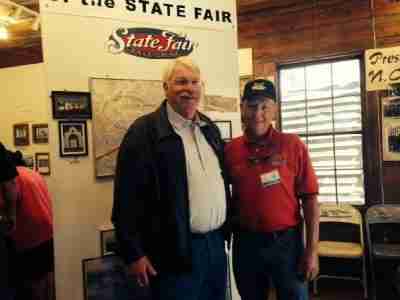 Paul Blankinship, right, with Commissioner Steve Troxler at the 2014 fair.

Blankinship grew up in Brevard in Transylvania County. After graduating high school, he went to college in Florida to pursue a degree in physics. In 1971, he moved to Raleigh to earn a graduate degree in oceanography at N.C. State University, and shortly after he met his wife. They married in 1977. It wasn’t until they settled into their first home that Blankinship developed an interest in the history of the fair.

“We bought a house in the Fairmont subdivision,” he said. “It was the genesis of my interest in the State Fair. After living in the house for several years, I learned that the State Fair had been at that location, so I started reading up on it and researching about it.”

The fair has had three different locations since its founding in 1853. Its second location was in Blankinship’s neighborhood from 1873 to 1925. However, he said finding information about the early days of the fall tradition proved a difficult task.

“There was no easy way to gather the information I was interested in,” he said.

He visited a variety of archives and libraries, including sites at the University of North Carolina at Chapel Hill, N.C. State University and Duke University. He also had access to several private files through friends and family. He said he has expanded the number of visual historical elements over the years.

“I looked at miles and miles of microfilm,” he said, “virtually of every year from 1853 to the 1930s. After the 1930s, it became the modern fair we know today, but I was interested in the early history.” 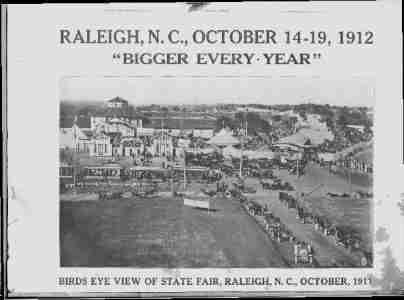 A piece in Blakinship’s collection that he describes as “the best view of the second fairgrounds site I’ve found.”

Over time, he built an impressive collection of his own and presented it to past and current fair managers.

“They set up a meeting at the Administration Building to take a look at my material,” he said. “[Former manager] Sam Rand and Wesley Wyatt were there, and, after a short presentation, said, ‘Let’s find this guy a place to set up for the fair.’”

This year is Blakinship’s 25th and last year presenting his annual exhibit, History of the North Carolina State Fair. He began showing his collected materials in 1992, and after trying several buildings over the years, he has taken root in the one-room schoolhouse in Heritage Circle.

“After a couple of locations didn’t work out, I did the schoolhouse,” he said. “I love that location. It’s kind of off the beaten track.”

He remains surprised that his exhibit has been around for so long.

“I’ve kept a log on the inside door of my exhibit at the fair, making comments that I can’t believe I’m still doing it every five years or so,” he said.

Despite gathering hundreds of photos and illustrations from fairs past, Blankinship said his favorite item in his collection is a one-of-a-kind lifetime membership certificate issued in 1873. It states that D.S. Wail of Raleigh is a life member of the North Carolina Agricultural Society, a private organization that owned and operated the fair for several years.

“This is the only one in existence that I know of,” he said, “and it’s in my personal collection.”

At the end of October, he hopes to donate his collection to the N.C. Archives and do some sightseeing.

“I’ll be traveling,” he said. “October is a great time to see the mountain colors, and cooler than summer months to see the western part of the country.”

This year visitors will celebrate the 150th gathering of he annual fall tradition know as the N.C. State Fair with rides, fried foods and games. But Blankinship said the first fair was originally started as an outlet for farmers to improve their work.

“Farmers were mostly illiterate and not exposed to modern agricultural practices that were coming of age in the industrial revolution,” he said. “The farmers would be exposed to new techniques and improving productivity at the fair.”

He said the actual attraction for farmers was something different. “The real draw to get the farmers to go to the fair was the horse racing,” he said. “Imagine NASCAR, pro football, soccer and baseball all rolled into one. That was horse racing.”

Blankinship has seen many changes at the fairgrounds throughout his time there, but he said the racetrack is the aspect he misses the most.

“The racetrack was an old component that got people to come to the fair in its beginnings,” he said, “and I’m sorry it wasn’t able to stick around.”

Still, there have been a lot of improvements to the grounds.

“There have been a number of buildings that have been erected,” he said. “And the flowers, the decorations that the fair does each year are really spectacular. Each year I see something new and interesting that the fair has done.”

In addition to eating a steak sandwich and visiting different exhibits, Blankinship said one of his favorite things about the fair is seeing all the people that come to it.

“I like to just walk around and see the people,” he said. “Probably what everyone else enjoys about the fair.”