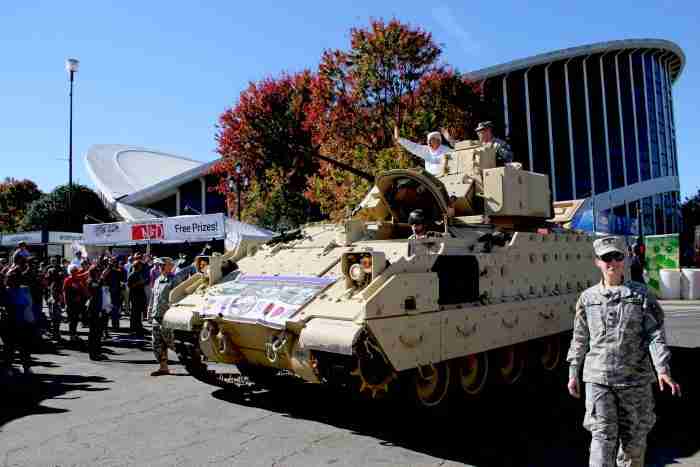 The Military Appreciation Day Parade will be held at 11 a.m. on the main midway and through Kiddieland.

The N.C. State Fair will celebrate members of the U.S. Military for their contributions to keeping our country safe on Military Appreciation Day, Wednesday, Oct. 19. As part of this tribute there will be several activities for fairgoers to participate in. Here’s a look at the deals and activities planned.
Free pins
The first 3,000 people through the gates on Military Appreciation Day will receive a military appreciation pin.
Military Appreciation Parade
The parade will feature a Bradley Fighting Vehicle, a World War II-era torpedo, the N.C. Patriot Guard and more. The parade kicks off on the main carnival midway at 11 a.m. and will pass through Kiddieland and by the Kerr Scott Building before returning to the midway.
Military Displays
Show your support for the North Carolina National Guard as they display military equipment ranging from an Abrams Main Battle Tank, a High Mobility Artillery Rocket System, a Mini-C-130 Aircraft and more. The displays will be in the Grandstand until 6 p.m.

The Kitchen Craft Waterfall Stage will host a Military Appreciation Program at noon, with the 440th Army Band performing at 12:30, 4 and 6 p.m. There will also be a Historical Military Uniform Revue presented by the N.C. Department of Cultural Resources at 2:30 p.m.
Daily Admission Military Discount
Every day, active-duty service members, reservists, National Guardsmen, retired and veteran personnel, and their dependents (ages 13-64), can get a discount admission of $6. Military members and their dependents should present proof of military service at the gate on the day of their visit and will receive one discounted ticket per valid identification presented. Veterans are offered the same discount, plus one discounted ticket for a guest or dependent with valid ID presented, for a total of two tickets at the reduced rate.
Come out on Military Appreciation Day and show your support for our servicemen and women.