Catching up with Keith King

I recently had the opportunity to slow down our favorite BMX biker (Keith King!) to find out what he and his group of riders have been up to this summer and what they’ve got planned for the State Fair this year. 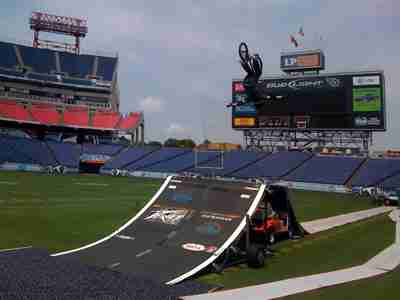 A rider takes a practice run on the Tennessee Titans' field before the game Sept. 3.

What’s been going on with the King Action Sports Stunt Show this summer?
Summer is not as busy as fall is for us.  We performed for a camp in Pennsylvania and also at Carowinds. We also did several other shows, such as our annual Fourth of July show in Lillington. We’ve also been working on equipment and ramps. To end the summer, we performed for the Tennessee Titans …  As always, it’s really fun to be the half-time entertainment for more than 70,000 football fans.

Anything exciting going on between now and the State Fair?
We have a lot of upcoming shows. We’re performing at fairs, corporate events, festivals, etc.  We’re headed to the Tennessee State Fair to perform Sept. 11-21 and to the North Georgia State Fair Sept. 24 – Oct. 4.  On Sept 18, we will also be in Winston-Salem for Rock the Block . The City of Winston-Salem plans to have a camera crew and a jumbotron for our show. I am looking forward to this. We also have a new shoe sponsor on board for our 2009 Fall Tour, Air Speed Shoes.

Can fairgoers expect anything new this year?
As always, new riders, new faces and new tricks! We’ll have a few changes in the set up. The FMX (motocross) is back. And we may have a few shows with Mountain Bike trials riding.

Keith recently put together this video of some of the most high-flying moments at the 2008 N.C. State Fair. Enjoy!