The N.C. State Fair kicks off in a few months, but there’s a ton of preparation already in motion. We’ll bring you behind-the-scenes interviews with fairgrounds employees working to bring you “A Whole Lotta Happy” when the gates open Thursday, Oct. 15.

We’re getting really close to announcing our 2009 Dorton Arena concert lineup (check back right here Monday, July 6, for the full scoop), so we wanted to check in with concert manager Mike Pleasant to see how he plans one of the Fair’s most popular attractions.

The ’09 Fair will mark Mike’s 30th, and for eight of those years he has been in charge of booking the Dorton Arena acts that perform each night during the Fair, and assisting the artists and their tour crews during their shows. It gets so busy during the Fair that Mike even sets up a mobile office at Dorton, right beside the tour buses that load in and out each day. Because he has so much interaction with these stars, I had to ask him what his favorite shows over the past few years have been.

That is a hard question.  We have had some good shows in Dorton the past seven years and it’s hard to pick just one.  I will give you my top five.

Part one of our interview with Mike focuses on how he sets up the stage and seating arrangements right before the concerts, and how he goes about choosing and booking the artists each year. Check in next week for a tour of Dorton like you’ve never seen it before, when Mike takes us into the basement where the stars hang out, eat, get dressed and host their meet-and-greets.

Watch the video and let us know–who are you hoping to see in the concert lineup come Monday? 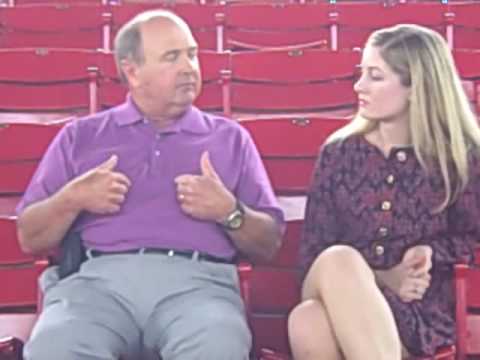