Home 2013 N.C. State Fair Behind the scenes: The sweet taste of competition at the State Fair

Behind the scenes: The sweet taste of competition at the State Fair 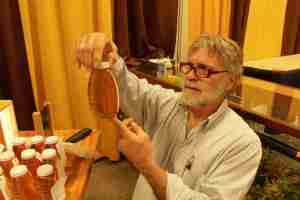 Judging took place Wednesday afternoon in the honey competition at the fair. Bob Wellemeyer, an apiary inspector for the Virgina Department of Agriculture and Consumer Services, talked with us about what goes into judging a jar of honey. 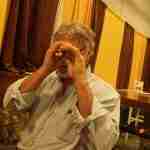 A refractometer is used to measure the moisture conent of honey.

While moisture content may be the most important criteria in judging honey, competitors are also scored on appearance.  Judges are looking at the cleanliness of the jar, the absence of honey on the lid, that the one-pound jar is not over-or under-filled and the absence of foam, dirt or crystals in the honey. Foam on top means that too much air has gotten into the honey in the extraction process. A polariscope is used to denote crystals in the honey, the honey with the best score will have the least amount of crystals.

Finally, 20 percent of the score is based on the flavor of the honey. “I like some honeys better than others,” Wellmeyer said. “What I am really looking for when tasting the honey is if there has been any processing that adversely affects the taste.” Judges taste the honey by pulling out a sample from the jar using a toothpick. I was able to taste a jar of honey that was entered into the creamed honey competition and it was delicious. 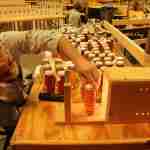 A polariscope is used to view crystals in the honey. The fewer the crystals the better the honey.