Beaten, but not out 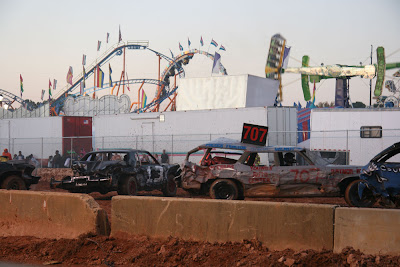 The Demolition Derby at the N.C. State Fair wrapped up its final bone-crunching heats tonight and we have names of the drivers who were the last ones standing, i.e. THE WINNERS.
In the 4-cylinder feature heat, Tony Camptella of Raleigh finished first in the Moonshine Express, after eliminating Jimmy Goodman of Topsail Beach who drove the number 121 car.

In the 6-cylinder feature heat, Ricky Cooke of Jamestown knocked out Jimmy Goodman of Topsail Beach for bragging rights.

And finally, in the Women’s feature, Nikki Goins of Goldsboro beat Wendy Thornton of Mt. Olive to take the title.

Congratulations to all the winners!