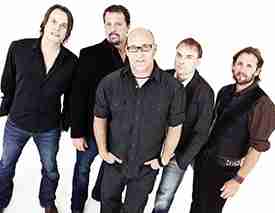 Sister Hazel will kick off the 2013 State Fair concert series on Thursday, Oct. 17. The alternative rock band has been making music since 1993, and is best known for the song “All For You,” which topped the charts in 1997.

The band’s music has gotten better with age and grown stronger over time. Their dedication to creating good music with honest lyrics has required a close bond between members, and Sister Hazel is proud of their band family.

The tightness of this crew has evolved throughout their career, and they have never stopped short in their Southern pop-rock tunes. All five members of Sister Hazel play a role in creating their music, whether that means producing or writing music or lyrics.

Their most recent album, “Heartland Highway,” is full of songs true to Sister Hazel’s longtime rock roots. The album’s single, “Stay Awhile,” has the same alternative feel with hints of country twang that their music is known for.

Even if you aren’t familiar with “Stay Awhile,” I bet you’ve heard their all-time hit, “All for You.” It’s hard to have grown up here without hearing this song. If the song title doesn’t take you back, the chorus certainly will: “It’s hard to say what it is I see in you, I wonder if I’ll always be with you. But words can’t say, and I can’t do enough to prove it’s all for you.”

It’s a sentiment and sound that holds up well.