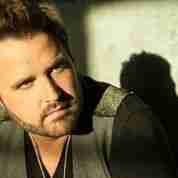 If you have listened to country music for any time, you’ve probably heard some of Randy Houser’s lyrics or music. Before releasing his own album, Houser made a name for himself as a songwriter. Trace Adkins’ 2005 hit, “Honky Tonk Badonkadonk,” was co-written by Houser.

But with his sights set on becoming a recording artist, Houser kept some songs for himself, and is now known for his recently popular single “How Country Feels.”

Being musically gifted wasn’t something that Houser had to work hard for; from a young age, he showed promise for performing and songwriting. His father was a professional musician, and by the age of 13, Houser had his own band. During his college years, he and his band called themselves the “10 lb. Biscuit” (I can’t imagine why he didn’t keep that name).

In 2002, Houser packed up and headed to Nashville to pursue a career in songwriting. The time he put into collaborating and writing lyrics was well-spent, and by the time “Honky Tonk Badonkadonk” rose to the top of the charts, Houser was popular in the industry.

Luckily, he saved some of his songs for himself, and in 2008, Houser released his own album. The hit from the album, “Anything Goes,” reached the top of the charts in no time, and audiences soaked up the artist’s raw sound and distinctly country lyrics.

Houser’s ability to capture the ups and downs of life and turn them into an uptempo country anthem has only gotten better. His most recent album, “How Country Feels,” is full of the artist’s best work.

My personal favorite is the title track because of its catchy tune and story. No doubt about it, Houser is definitely speaking to hordes of his city-raised fans – including me – when he opens the song with, “You were raised on an asphalt farm / never heard a rooster crow,” and then sings “Let me show you how country feels.” Houser accomplishes his goal, and by the end of the song, I see myself riding in a pickup in the middle of nowhere without a care in the world.

Just listen to the song yourself, and I can guarantee you’ll want to see how country feels in Dorton Arena on Oct. 26. Tickets are $10 and the concert starts at 7:30 p.m.