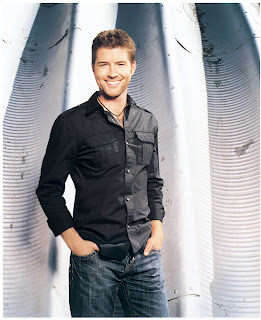 Okay, I’m not a country music fan like my colleague, Cotton Candy, but I’ve gotta love an artist who has a song named after me: Firecracker”>

. So, what can I say? I like Josh Turner already. Of course, Josh has lots of great tunes, including his debut hit, Long Black Train, Would You Go With Me, Your Man and Everything is Fine.

If it seems like deja vu seeing Josh’s name on the entertainment lineup, there’s good reason: Josh performed before a sold out crowd in Dorton Arena last year. But he was so well received, he was happy to make the return trip to Raleigh for another gig in Dorton Arena on Thursday, Oct. 16.

Just a week before he steps on the stage to kick off the State Fair, Josh Turner will kick-off a new part of his career — acting. On Oct. 10, Billy: The Early Years will open in theaters, with Josh Turner co-starring in the biopic about North Carolina’s own Billy Graham. Josh plays the role of George Beverly Shea, Billy’s long-time friend and song leader at hundreds of Graham Crusades across the world.

From AceShowBiz.com: Sharing his insight about his role in the film, the 2007 Grammy Awards-nominated singer revealed that his part is more like a tribute to the famed-as-spiritual adviser to multiple U.S. presidents evangelist and the prominent gospel singer/songwriter. “It was my way of honoring the legacy of George Beverly Shea and Billy Graham and what they’ve done in their lives and their careers and the lives they’ve touched – obviously including mine,” he said.

On the person whom he is depicting in the movie, he stated, “A lot of people don’t know who George Beverly Shea is, and I’m always kind of surprised by that. I’ve always been familiar with what they’ve done, what they’ve been about. So when this part was offered to me, I said yes right off the bat, absolutely. There was no thinking about it. It was a great opportunity.” -Ace Showbiz News

Great tickets are still available for Josh Turner at www.ncstatefair.org. Tickets are just $22!