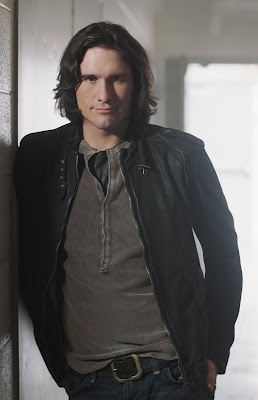 Joe Nichols has tough-guy good looks, two number one singles, six chart-topping albums, and shares a birthday with me (Nov. 26, ladies…maybe you should bring him an early birthday present to his Fair concert?)–but is still a normal guy with normal guy problems, reports GAC:

The national media has had a field day with a gas shortage in Nashville; as many as 80 percent of the stations in the city have gone dry at some point. . .Joe Nichols found himself in a crunch just to get to the recording studio. Joe’s primary car was on empty, but he had a backup plan: his orange 1975 Chevy Silverado. Joe nicknamed that car “Rusty,” but rust isn’t the only issue — it also has no windows and no air conditioning. Fortunately, it did have some gas in the tank. So Joe pulled out a hose and syphoned gas from Rusty into his “good car.”

“Usually I wouldn’t mind driving my old truck into town,” Joe says. “But with the gas shortage in Nashville and all the AAA people tied up rescuing stranded motorists with no gas, I couldn’t risk running out of gas and the sides of the truck falling off on the interstate. She’s called ‘Rusty’ for a reason — the rust is about all that’s holding her together!”

But gas won’t stop Joe Nichols from making it to the Fair in just a few days, and from what I’ve read, he gives a very unique show. A recent concert review notes he mixes it up at his concerts, singing his songs (“Brokenheartsville,” “Tequila Makes Her Clothes Fall Off,” “The Impossible”) along with Hank Williams, Jr. and…get his…Canadian rock group Nickelback. Get your tickets to the show for $11.50 and let us know what his set list is during the Fair Saturday, Oct. 25.

(And by the way, if you’re feeling the gas crunch like Joe was, make sure to check out our Park and Ride options for the Fair.)