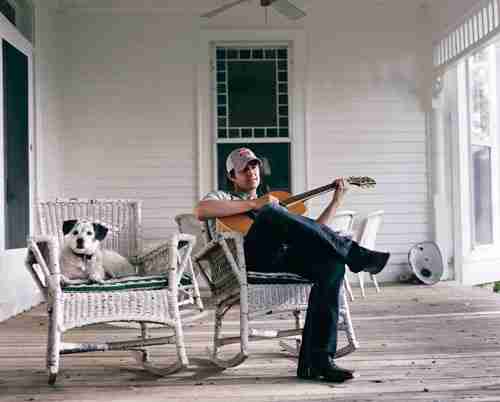 Looking at Easton Corbin’s cover art and listening to his first hit single, “I’m a Little More Country Than That,” you get the feeling that this Florida native has a firsthand knowledge of the slow pace of country living, rocking on the porch with your dog by your side. And sure enough, according to the biography on his website, he spent a lot of time growing up on his grandparents’ cattle farm in rural Florida. He was a member of 4-H and FFA and even showed cattle at a local fair before earning an agribusiness degree from the University of Florida. As a matter of fact, his small-town experience sounds a lot like growing up in parts of North Carolina:

Growing up in the smallest county in the state on farmland nestled between two small towns had its advantages.  It’s a close community. Everybody knows everybody. There’s no Wal-Mart there. There was a Hardees’s, but it closed. That was the only franchise fast food place in the county. Trenton has a red light; Bell has a blinking light. It’s a great place.

I saw Easton Corbin perform at The Longbranch in Raleigh at the end of April. I was later told that that was the first time he did a full solo concert. I never would have guessed it. He performed a great show, singing mostly songs from his debut album and many obscure, older country songs thrown in here and there. Two friends (including former Deep Fried crew member, Cotton Candy) and I actually got to talk to him and Drew Belk, his amazing steel guitar player, for almost an hour after the concert. Easton and Drew were both down-to-earth guys whose love for country music was obvious.

In the middle of the conversation, I asked Easton about his dog. He looked a little perplexed, and then realized I was talking about the dog on the album cover. Turns out the dog isn’t his. The dog lived at, or near, the house where they were shooting the promotional pictures and the dog just jumped up in the chair and hung out. Doesn’t surprise me a bit. I imagine that Easton was probably strumming along on the guitar and singing, and the dog felt right at home with this very genuine artist. I expect that if you come to see Easton Corbin in Dorton Arena on Monday, Oct. 18, you’ll feel right at home, too.

Tickets are only $5 and they go on sale Wednesday, Sept. 1, at www.ncstatefair.org.