The mystery artist has been revealed. 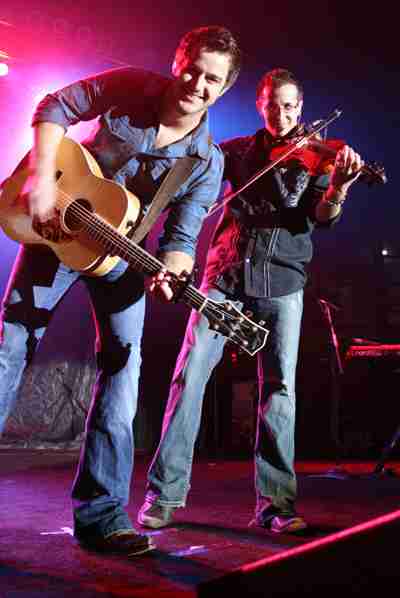 Easton Corbin smiles at the camera, in Dorton Arena at the 2010 N.C. State Fair

Easton Corbin is coming back and he’s no stranger to Raleigh. After all, Easton performed his first full-length solo concert last year at the Longbranch in Raleigh. He has played at Walnut Creek several times now (including this past Saturday night) and of course, he played Dorton Arena last year to a good-sized crowd.

Last year, fairgoers in Dorton Arena sang along with his hits “A Little More Country Than That,” “Roll With It” and “I Just Can’t Love You Back,” among others. The beginning of the concert was good, but he seemed a little out of touch with the crowd. But after he invited fairgoers to leave their seats and join him at the stage, Easton seemed to feed off the crowd and settle in. He had good reason to be cheerful. His second single, “Roll With It,” hit number one on the Billboard charts that week. And the day of his concert in Dorton Arena, it was announced that he was nominated for the American Country Music Awards Breakthrough Artist of the Year Award, which he subsequently won. Maybe Dorton Arena is his good luck charm.

While he is still getting airplay off his self-titled debut album, Easton recently posted a picture on his Facebook page of a recording studio. He says he’s cutting some new music. It’s doubtful that anything will be released before the fair, so we’ll just have to sing along to “A Lot to Learn About Living,” “Leaving A Lonely Town” and “The Way Love Looks.” He’s also known to throw obscure, old country into the mix. Which doesn’t sound so old when he sings it.