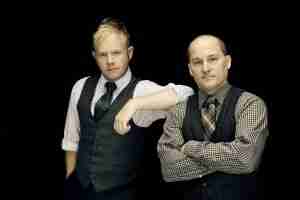 I must admit, I’ve never been much of a bluegrass fan, but it’s safe to say that after listening to Dailey & Vincent, I’ve been converted. The band is clearly after more than popular, mainstream recognition; it seeks true artistry and authenticity in its music.

Jamie Dailey and Darrin Vincent founded the group in 2007 and have been entertaining with a unique blend of harmonic vocals and instrumentals ever since.

The pair is joined by four other band members to create an authentically bluegrass experience. This band is undoubtedly talented; each member is a gifted musician with a slew of awards to prove it. Dailey & Vincent is a two-time Grammy nominee and has been sweeping bluegrass awards since 2008. To add to it, the band also has four award-winning albums and international bluegrass recognition under its belt.

Listening to Dailey & Vincent further proves the point that these guys mean business when it comes to their music. Even if you think you don’t like bluegrass, listen. When I hear other songs on the radio, it normally feels like the instrumental music is a simple background for the singer’s vocals, and there isn’t interaction between the two. But here, the banjo and fiddle are not just frames for the voices; Dailey & Vincent bring the instruments to life and blend their vocals with the music.

Dailey & Vincent have made it easy to enjoy bluegrass with their quality music and songs. See for yourself and watch their version of The Louvin Brothers’ “When I Stop Dreaming.”