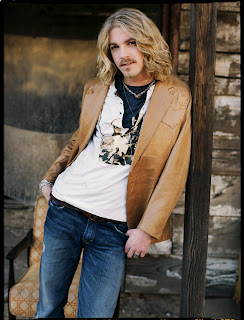 For the past couple of years we’ve had plenty of home-grown talent as part of the entertainment line-up in Dorton Arena. In 2007, fans were treated to performances by North Carolina natives Kellie Pickler and Chris Daughtry. In 2004, Raleigh’s own Clay Aiken performed, followed by High Point’s Fantasia Barrino in 2005. This year, fellow American Idol alum and N.C. native Bucky Covington will bring his country-rock sound to the Fair on Tuesday, Oct. 21.

Covington’s performance will draw plenty of family and friends from Rockingham, according to Bucky’s dad, Gene. We caught up with Gene at the family business – Covington’s Body Shop in Hamlet. He was most gracious to answer a few questions about his son’s success and upcoming show.

The elder Covington said several family members are planning to come to the Fair to see Bucky, and he’s even bringing the Mayor of Rockingham to the show. The family saw him at the Dixie Classic Fair in Winston-Salem and at a show in Virginia recently. With a busy touring schedule, nearby shows are the best opportunity to see Bucky, and Rocky, his twin brother, who is the drummer in the band.

The twins worked at the family’s body shop before Bucky became a household name. “Bucky was really good at painting,” Gene said. Although both boys have left the family business, Gene said “the work still goes on here. I miss them both, but like they say, ‘The show must go on.’”

Life on the road keeps the brothers busy, Gene said, but in the down time, both guys enjoy time on a lake in Nashville. “Both of them have boats. Bucky’s got a 38-foot houseboat, a fast bass boat and a cabin cruiser,” he said. Bucky has been in the studio recording his second CD and his dad said fans will probably hear a couple of the new cuts at the concert.

Life in Rockingham and Hamlet has settled down a bit since the days when Bucky was a weekly fixture on American Idol. “When he was on American Idol people would come from out of town and drive by the shop or stop in wanting to take pictures,” Gene said, adding he still sees curious fans from time to time. “The other day a carload of people parked in front of the shop and took some pictures. And when he gets close around, phones start ringing a little bit,” he said laughing.

According to the 2000 Census, Rockingham in Richmond County has a population of 9,672 people. Those small-town roots are well reflected in some of Bucky’s biggest hits. There’s a real sincerity when he sings the lyrics ‘had three TV channels you got up to change’ from “A Different World.” Fans can expect to hear that song plus other big hits off his self-titled debut album. Tickets have sold well for the show, but there are still some good seats available for just $5.