After 60 years, Carl Beard still works poultry exhibit one year at a time 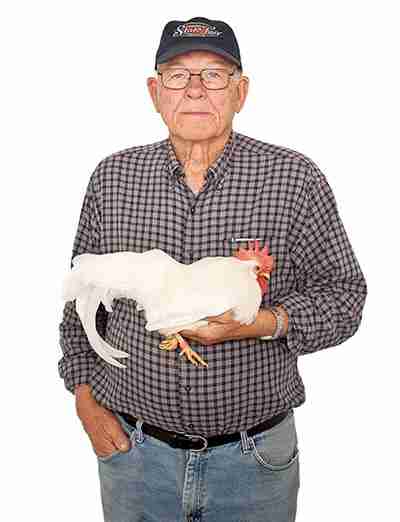 Carl Beard has worked at the State Fair poultry exhibit for 60 years. Photo courtesy of Robert and Robbie Bailey.

Guest author Robbie Bailey grew up in Raleigh, but now lives with her husband in New York City, where they are professional photographers. She still returns to Raleigh for the State Fair when her schedule allows it. The Baileys’ photographs of poultry exhibitors are on display in the south lobby of Dorton Arena.

Those of us who grew up in Raleigh know that the first hint of autumn is often timed perfectly with the arrival of the North Carolina State Fair. It is a treasured yearly tradition that usually involves family, Ferris wheels, funnel cakes and fireworks. Some of you might also have fond memories of holding your first bitty chicken or a yellow baby duckling.  If you did, you may have crossed paths with Carl Beard. He has been working faithfully in the State Fair poultry tent for the past 60 years.

To be completely accurate, it wasn’t always a tent. The poultry exhibit started out in an old building with dirt floors that turned into thick red mud whenever it rained. It had a loft where Carl and his buddies bunked down during the fair. He remembers doing more shivering than sleeping.

Just across the way was a shiny new building known as the State Fair Livestock Pavilion, an architectural gem that would later be named the J.S. Dorton Arena. The year was 1954 and Carl was 24 years old. Marilyn Monroe had just married baseball player Joe DiMaggio, and Dwight D. Eisenhower was the president of the United States.

Carl was supposed to work at the poultry exhibit for only that one year. It was a duty normally assigned to his father-in-law. That particular year, Carl’s mother-in-law became ill and Carl’s father-in-law asked him to go and work in his stead. So, he packed up his pickup truck in Maiden and headed toward the state capital. The only travel route available at that time was N.C. 64 and it was a road that meandered slowly through each and every small town on the map between here and Hickory. The travel time of that first trip took almost seven hours. Young Carl had no way of knowing that he would be taking a similar journey every October for the next 59 years.

Let’s fast-forward to 2014. It’s Sunday morning and I am sitting next to Carl in the poultry tent. To catch him seated is rare. He tells me that he and the crew were up at 5 a.m. moving turkeys around. The gates open at 8 and all the birds need to be fed and watered and the floors need to be swept. During the fair’s 11-day run, over 3,000 chickens, ducks, and turkeys will be in their care. That doesn’t include the set-up and breakdown that requires him to live out of an onsite camper for almost two weeks. He is 84 and I am awed by both his enthusiasm and his durability.

We begin our impromptu interview with hundreds of roosters crowing randomly from just a few feet away. The noise is so magnificently maddening that I have to lean in close to speak. “Can you hear me all right?” I ask without trying to yell in his ear. “Yes, mam! You’re sitting on the side of my hearing aid so I can understand you just fine!”

“Why do you do this?” I ask. Before he answers, he pulls a handkerchief from his pocket and gently blows his nose. The sight of the handkerchief awakens memories of my own farm-boy father, and I smile and do my best to hold back the lump that has suddenly appeared in my throat.

“Everyone here at the State Fair has been really good to me,” Carl says. “And I mean everyone, from the folks in the front office to the maintenance crew here on the grounds. That’s why I come back.

“My late father-in-law lived by himself for years and I used to go by every afternoon and check on him. A few weeks before the fair was supposed to start, I would notice him setting various things out on his front porch. I asked him what he was doing. He said that he reckoned he’d go back with me to the State Fair one more time. That went on for years until he could no longer make the trip. And I guess that’s me now. I can’t do it anymore without the help of my son, David, but I just keep telling myself … let’s go one more time.”

I inquire about some of Carl’s best memories and he tells me that he has most enjoyed the opportunity to meet and talk to new people here at the fair. He believes he’s met some of the finest ones around. When I joke about any politicians or celebrities that he’s encountered, he fondly recalls memories of Gov. Jim Hunt. “He would come over and eat with us four or five times during the fair,” he says. “It seems that nobody would bother him (or perhaps they just couldn’t find him) when he was over here with us, and he seemed happy to take a break and find a few moments of peace.”

I then ask about the late Jim Graham. “You only had to tell the Commissioner your name one time and he’d remember it the next year when he saw you. That’s what I liked about him.”

When asked about his family, Carl proudly boasts that he and his wife, Cleo, have been happily married for 65 years. They share four children, 14 grandchildren and five great-grandchildren. As mentioned before, Carl was able to make it to the 2014 North Carolina State Fair with the help of his devoted son, David. Cleo hopes to join them both here this weekend.

Before starting my interview with Carl, I had the privilege of speaking with Dr. Carm Parkhurst. You would be hard pressed to find a man more qualified in his field of expertise. In addition to being a well-respected professor emeritus of poultry science at N.C. State University, he is currently the general division director of the State Fair Poultry Competition where he and Carl have worked together for over 30 years. He regards Carl as the “architect” of the poultry tent. Carl also clerks the competitions and helps report the results back to the American Poultry Association. Dr. Parkhurst believes that Carl and the other yearly participants are helping to maintain a genetic pool of poultry that are both valued for their breeding potential and the continuation of many poultry species that might otherwise go extinct. How cool is that?

If you’d like to add a special treat to your fair activities this year, I’d highly recommend a visit to the poultry exhibition. If you’re lucky enough to run into Carl, I hope you’ll stop and shake his hand and thank him for his 60 years of service and for a job well done. We all hope that he will keep coming back … for one more year … for many years to come!