OK, so I took Firecracker up on her challenge to do something at the Fair that I had never done. As we were talking through this idea, it came to our attention that there were plenty of things to choose from, which seemed crazy since this is the 14th year for both of us. So on Friday after the official tobacco-tying contest was finished, I decided on the spur of the moment to try my hand at stringing tobacco. And I knew exactly who I was going to get to teach me to string tobacco – Sandy Jones of Maple Hill, who loops tobacco.

For those that might not know, or who missed the contest, the difference between stringing and looping is really just semantics. If you live in the eastern part of the state, it is called looping. If you live in the foothills area, where I grew up, it was called stringing. Jones and her team, the Looping Fools, have been in the top three since the first tobacco-tying contest was held. They won in 2006 and 2007, and this year they finished third. She takes her tobacco looping pretty seriously, but she always keeps a smile on her face. 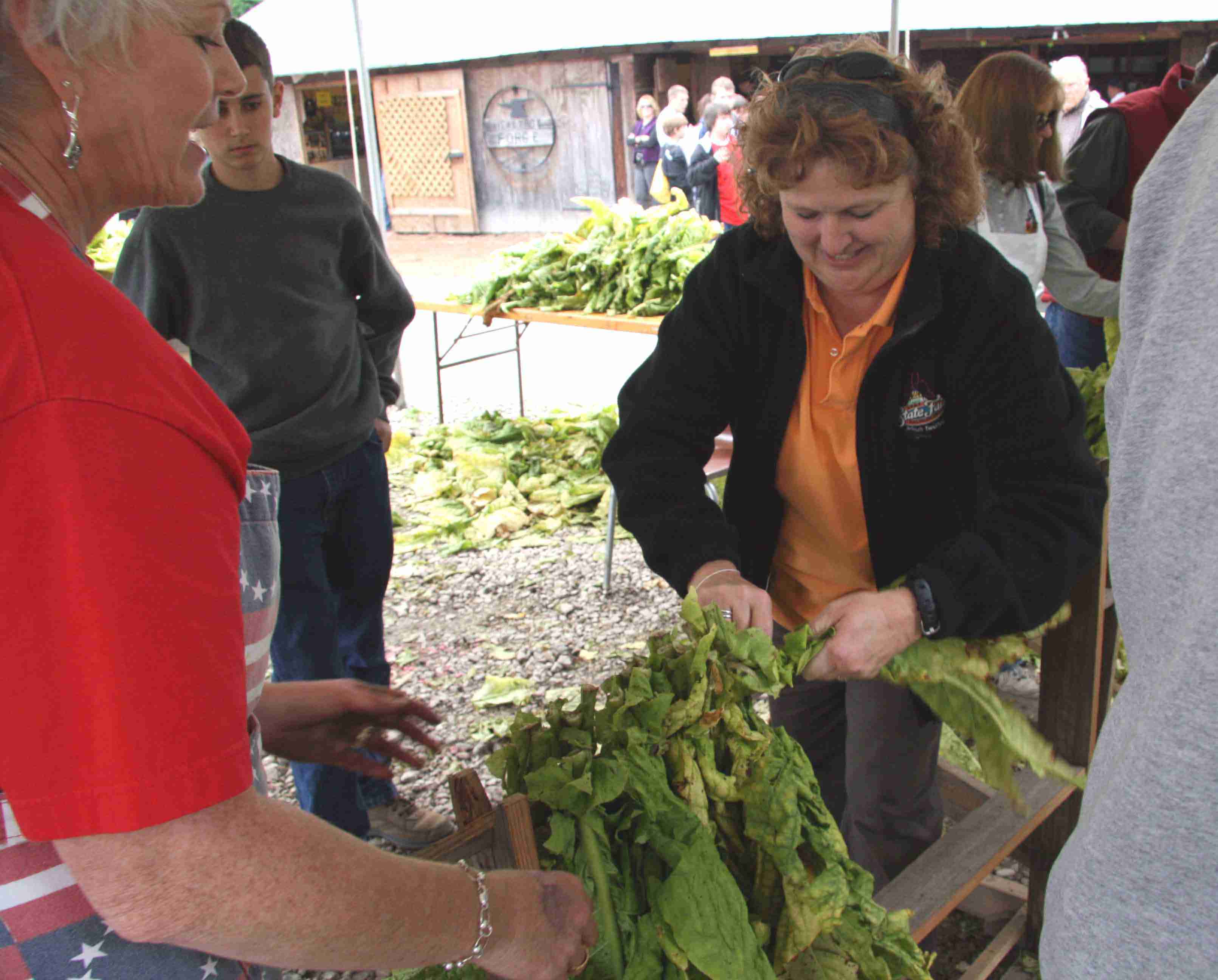 Andrea Ashby, aka Merrie Go Round from the State Fair Press Office, learns to string tobacco from Sandy Jones, left, following the Tobacco Tying Contest at the State Fair.

I have been around a tobacco barn before. My family grew tobacco for a few years when I was about 7 or 8. My main job was to keep tobacco sticks at the ready to be strung. One of my other jobs was to climb into the tobacco sled and round up the loose leaves at the bottom. The stringing was left to the skilled hands of my grandma and aunts so I never really learned how to string tobacco.

My memories of our time in tobacco were mostly good ones, maybe because my jobs were so specific and limited. I do remember rising well before the sun came up so we could be at my grandma’s house around or before daybreak. Her house was about 30 minutes or so from our house. I also remember how much fun it was to listen to the stories and the gossip of the day, and I distinctly remember a lot of laughter.

Lest anyone get the wrong idea, it was hard and repetitive work, particularly for the guys who went to the field and harvested the tobacco by hand. I did manage to talk my dad into “letting” me go to the field one day and prime tobacco. I think that was because he knew it would be a valuable lesson and that he wouldn’t be dealing with that question again. He was right, it never came up again.

Hand stringing and harvesting by hand isn’t really done anymore. Mechanical harvesters have replaced the back-straining field work and the leaves are now placed on trays and go into metal bulk barns for curing.

Anyway back to the State Fair challenge … I strung a whole stick of tobacco under the watchful eye and instruction of Jones and her daughter. I mostly got the hang of it. But just when I thought I was getting it, I had to be reminded again to flip the tobacco towards me when I was bringing it over the stick. All-in-all, I was plenty slow. Clearly, I was not a threat to any of the contestants in the tobacco-tying contest.

I did get compliments on keeping the tobacco nice and even across the top of the stick, and no leaves fell off the stick when it got a couple of quick shakes before heading off to the barn to be hung and cured.