Home 2013 N.C. State Fair A rookie at the Sale of Champions

A rookie at the Sale of Champions

Inside the Jim Graham Building, it took me a few seconds to acclimate to the sounds and smells of the animals, as bleating goats and mooing cows are not something I hear very often. The show ring was set up nicely for the auction, with a small seating area reserved for N.C. State Fair officials and bidders. My seat was in the front row of the bidder section so that I could take great photos. 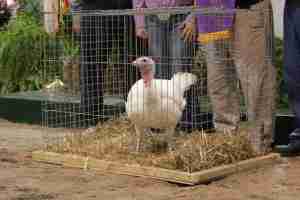 The grand champion turkey, shown by Victoria Pender of Wake Forest, was purchased by the N.C. Farm Bureau for $4,500. 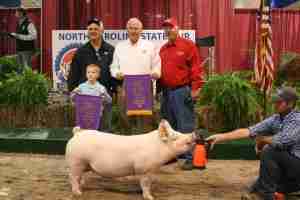 At 11 a.m., Agriculture Commissioner Steve Troxler introduced the event and Cowbelle and her sister sang the national anthem. Auctioneer E.B. Harris was given the microphone and introduced his helpers, Bruce Shankle and Livestock Director Neil Bowman. Before I knew it, the first exhibitor, Arnold Carpenter, 13, was entering the ring with his grand champion steer. Harris drew a deep breath in and began the auction. 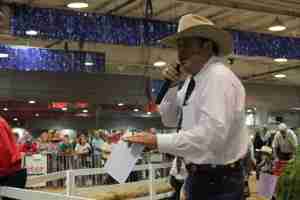 Auctioneer E.B. Harris is from Warrenton.

For those who have never heard an auctioneer speak, imagine hearing a foreign language without breaks between words. Even hours after the auction, I’m still not sure I ever understood him.

Apparently, my naivete must have been written across my face, because at one point I lifted a finger to scratch my nose, and Bowman pointed at me, yelling “Four and half!” Immediately, I knew I had been mistaken for a bidder. I looked at Harris and frantically shook my head no, but he continued as though my bid was intentional. He held his gaze a few moments until he broke into a smile and, still speaking like an auctioneer, said “I’m just messing with you.” I barely breathed, let alone moved, through the rest of the auction.

Exihibitors, who ranged in age from 6 to 17, collectively earned $97,600 for their top animals. For a complete list of winners and prizes awarded, see the official news release.

If you missed the sale, you can see a portion of the grand champion junior market lamb auction below.