A man’s heart for livestock, youth and auctioneering 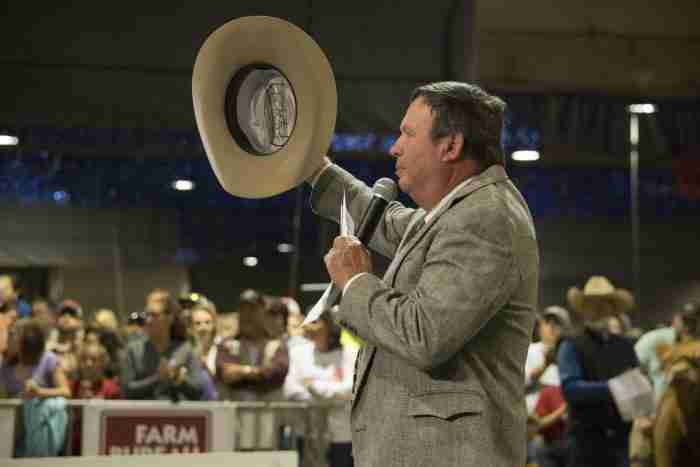 E.B. Harris has been auctioning champion livestock at the N.C. State Fair for more than three decades.

“Sold!” booms from the speakers. With that word, another animal is sold in the Sale of Champions at the N.C. State Fair. Proceeds from the sale benefit youth across the state.

Of course, you can’t sell an animal without an auctioneer. Meet E.B. Harris, the auctioneer for the Sale of Champions. While it takes a village to make the sale a success, Harris is the one who is center stage. He not only sells the animal, he also keeps the audience entertained and gives motivation to many walking through the ring. Harris has a history and passion for the livestock shows at the fair.

Harris grew up a third-generation farmer on his family’s farm in Warren County. From the start, livestock was a part of his life. “I think the first thing I heard other than my mother’s voice was a cow lowing,” he recalls. His mother started him off with chickens, but he worked his way up to the sheep and finally the cattle on the farm. Working with the animals taught him many lessons, such as hard work, interacting with people, and being kind and gentle to the animals. “Like my daddy said, you could love more milk out of a cow than you could beat out of them,” Harris said.

It was on the farm he developed a passion and love for livestock that would lead to a career as an auctioneer. “I used to go with my daddy to the stockyards, and the auctioneer always intrigued me,” Harris said. “In 1972, I started to work for a stockyard as a clerk. A friend of mine told me I need to go to school to become an auctioneer.”

Harris attended auctioneering school in Arkansas. When he returned, he started as auctioneer at the stockyard where he was a clerk. That was only the start. There was a need for folks to sell farm machinery, so they had an auction on their farm, with Harris at the helm. Over the years, it has grown into a very good business for the Harris family and pays their bills.

Auctioneering has become a family affair. His wife is in charge of the advertising and writes all the checks. His son, now a fourth-generation farmer, is also an auctioneer and teams up with his dad. 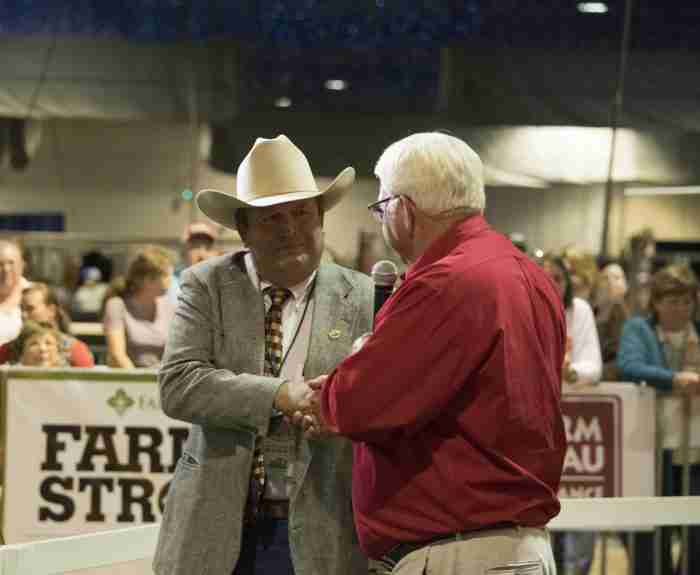 “I’m very dependent on my son,” Harris said. “When putting on an auction sale, it’s like a production, and you have to keep things flowing to make the production work. My son is just as good as I am, if not better, because he’s got a younger and sharper mind than I do, but experience does count in there somewhere, too.”

Of course, auctioneering also led Harris to selling animals at the N.C. State Fair. He began auctioneering at the fair in the late 1970s, early ’80s, but had already been helping his son and other youth by bringing livestock to be shown since the early ’70s. Harris never showed livestock at the State Fair himself, but did show at the county level. He recognized the benefits that shows had on youth.

The belief in the benefits of the livestock program brings Harris back every year. He sells the champions and tries to always walk through the barns. During the sale, he is always sure to thank the military and explain just how great the livestock program is for the youth. As the auctioneer of the Sale of Champions, there are a few guarantees — animals get sold, he makes spending money more enjoyable, and he shares his passion for an industry and the people within it. You know he loves his job.

“I enjoy every day of my work,” he said. “I can feel like I’m doing something that I love and enjoy doing and get to meet a lot of new people. Getting to know folks in livestock is a privilege, and they are so much fun to be around. The ag community as a whole … they are just great people.”