Home Fairgrounds Events A Day in the Life at the State Fair: Vendor edition

A Day in the Life at the State Fair: Vendor edition

When you consider attendance numbers, on any given day the N.C. State Fair is a lot like a small town. And just like a small town, there are many people working hard every day to keep things running, keep people fed and keep folks entertained and informed. The Deep Fried blog is doing A Day in the Life at the State Fair series to give fair-goers a behind-the-scenes look at the people who make the fair happen.

Today’s focus is on food vendor Chris Wrenn of Ragin’ Cajun. Food seems a logical place to start for this series since surveys show the No. 1 reason people say they come to the State Fair is the food.

Wrenn, of Fuquay-Varina, owns and operates the Ragin’ Cajun food booth, a staple at the State Fair since 2009. 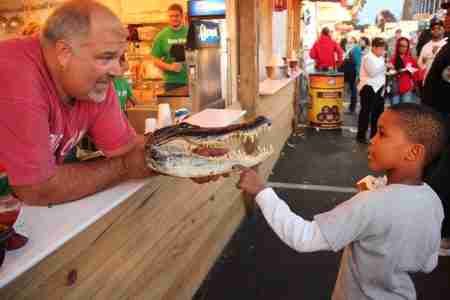 Wrenn easily clocks in 80-to-90-hour work weeks leading up to and during the State Fair, working out of a 20-foot-by-20-foot tent with a crew that flexes between six and 12 people. The Ragin Cajun serves up such popular Cajun and low-country fare as alligator on a stick, gumbo and rice, specialty hush puppies and more.

Each year Wrenn tries to come up with a new creation to capture the attention of hungry fair-goers.

“Without question this is a food fair,” Wrenn said. “People come out to eat and try new food items”

That’s what fuels his drive to innovate.

“I know how important it is to our customers and the bottom line,” he said. “It’s got to be interesting and really good. And fried things are always going to be popular.”

Wrenn begins brainstorming ideas even as he is in the midst of a fair. “The idea for deep-fried dirty rice came to me during the fair last year,” he said. 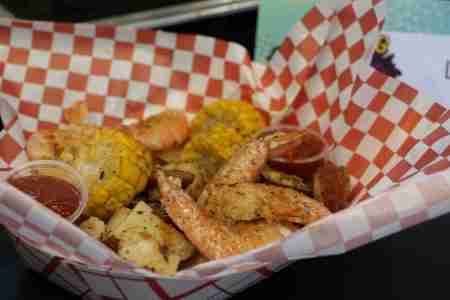 New menu items can be a big hit with customers looking to try something different. In 2016, Chris Wrenn debuted a low country boil on his menu featuring shrimp, potatoes and corn.

Typically, Wrenn’s day starts at 6:30 a.m. when he heads out to pick up his fresh products for the day. He arrives at the fairgrounds around 7:30 a.m. to begin the four hours of prep work it takes to ready his menu items.

Alligator meat is trimmed of fat and goes through a mechanical tenderizer three times to make sure it is not too chewy. On the weekends, Wrenn says he can sell more than 1,000 skewers of alligator.

For the first three years, Wrenn and crew worked out of a 8 1/2-foot by 20-foot trailer, but he knew he needed to expand the space to accommodate all the equipment he needed and work more efficiently. His tent, with its recognizable tin “roof” and slat-board front, is built from the ground up each year.

“When everything is in place, it’s just enough room to walk. Put 12 people in there on a Saturday and it’s full,” Wrenn said with a laugh.

Wrenn is a guy who appears ready to step up to a challenge.

This year, he will add a second booth, which will be located in Cotton Park, the former location of the N.C. Pork Council’s Pork Chop Shop. Wrenn’s offerings in the new location will be familiar with longtime fair-goers looking for a complete meal and a place to sit.

Visitors to the Old North State Kitchen can get a hearty plate of a meat and two sides. Barbecue and fried chicken are on the menu along with such traditional Southern sides as three-cheese mac and cheese, collards, potatoes, green beans, corn pudding and sweet potatoes. He will also sell desserts, including a Cheerwine cake with butter creme icing and cobblers.

With so much on his plate and the fair just a couple of weeks away, you would think that might be the only thing he is focused on, but it is not. Wrenn has just returned from Florida where he cooked and served 34,000 meals in 13 days to power crews and others working in recovery efforts.

Interesting side notes:
Is fair fatigue a real thing? “Yes, after five days it hits me. I feel like a truck has run over me.”

The hardest part? “Tear down.”

Do you get out and see the fair? “Yes, I love going to see the animals. It’s quieter over there.”

Who are his workers? “Family, friends, folks from church. It takes a lot of people.”

Your three-cheese mac and cheese makes appearances at special occasions. Tell us more. “This is a dish we serve at weddings we cater. The exact same mac and cheese. I am excited to offer it at the fair.”