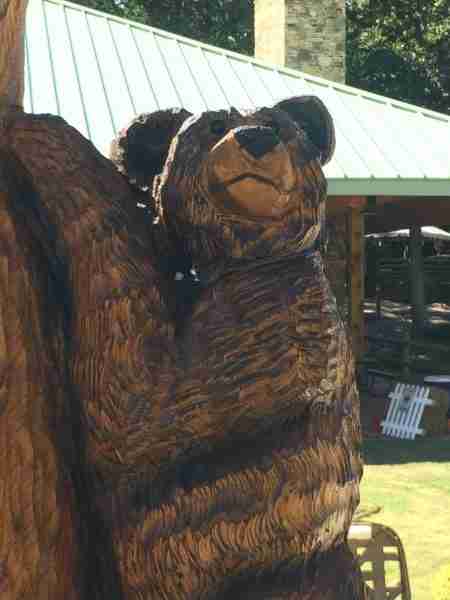 Bluegrass music and the sputter and pops of John Deere hit-and-miss engines churning ice cream are familiar sounds in Heritage Circle during the fair. This week, the area was dominated by the sounds of Jerry Reid’s chainsaw.

Reid, who lives off Lizard Lick road in Zebulon, has been hard at work on a stump carving for the area.  During the fair, his 18-foot-tall carving of a pair of eagles and a bear will greet fairgoers from the center of Heritage Circle. 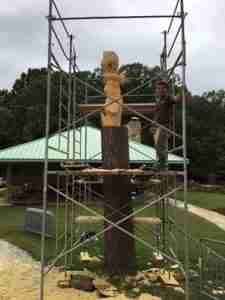 “We wanted to create a nature scene that fit in with the feel of the area,” Reid said. “Every part of the yellow pine sculpture is carved using the chainsaw. Different color stains are used to help preserve the piece. Stump carvings last about ten years, so fairgoers should be able to enjoy it for years to come.”

It took about three days for Reid to complete the carving. “The stump was only about 20-inches around so it was a little limited to what I could do with it. But the eagles and bear fit nicely with the feel of Heritage Circle.” Different oil-based stains in several hues are used to seal the carving after completion. The stains are similar to what is used for decks or log cabins.

Reid’s work includes a larger-than-life bear for Holding Park in Wake Forest, carved for their Arbor Day Celebration and a wolf carving for N.C. State’s Wolf Village apartments. “Most of my carvings I put in my gallery, Smoky Mountain Arts in Gaitlinburg,” he said.

Reid’s been carving for about six years. “I saw a guy doing a carving one time and thought it looked fun. So I tried it,” he said. When asked about his very first carving Reid said it was a bear. “I did a little bear like everybody. Everybody starts with a bear.”