4-H kids get their first taste of competition

This is the second in a series of blogs about a  4-H group that meets each week at Carvel Cheves’ sheep farm in Bunn. We will be following this group of 4-H youngsters and their parents as they get ready for the N.C. State Fair livestock shows. We will tell their story on the blog, highlighting their successes and sharing what they are learning through the process.

The children you will meet along the way are Emily and Dustin Best, Joey Moore, Ted and Jacob Noe, Isabel and Sophia Nobles, Madison Pippin, Daniel Barker, and Wesley, Faith, Luke and Carter Dunbar. They range in age from 7 to 18.  The group leader is Alesia Moore, who is mom to Joey and has been involved with 4-H programs since she was a child.

Here’s the first blog post in case you missed it.

There comes a time when every competitior has to enter the show ring; has to put his training to the test; has to see how he compares to the competition; has to learn his strengths and weaknesses. For the kids meeting at the Cheves farm, Sept. 9 was the first day to see how their animals would compete in the show ring, and it was also the day to figure out what else they needed to work on as showman.

For Emily, Isabel and Sophia, the Four County Livestock Show in Oxford would be the first time any of them have ever been in the show ring with sheep.

On the Wednesday night prior to the show, each one of the girls admitted they were nervous but also excited. “I worry that my sheep won’t walk like she is supposed to or will jump around. That would be embarrassing,” Isabel said.

“There will always be sheep that will act up in the ring,” Joey says. “Don’t worry, you won’t be alone.”

Isabel takes the advice, but given that her sheep has been one of the more spirited ones the kids have been working with, she still seems a bit nervous about what to expect.

Joey, who has been involved with 4-H since he was 9 and has shown meat and wool breed sheep for six years, admits he is nervous, too. “You never know what other sheep will be in the ring, and how yours will respond and how it will compare to the competition,” he said.

Emily is nervous and excited about the upcoming show too. “The only thing I have ever shown is a painting,” she said.

That evening the children put the animals through their paces, gently leading them in a single-file line in a circle while maintaining eye contact with “judge” Alesia Moore. She asks each child to stop and line the animals up nose to tail in a single line so she can check out each sheep individually.  “During competition, the judges will ask you questions about your sheep, so you need to make sure you know as many details about it as you can,” Moore said.  Important information includes the animal’s birthdate, what and how much you are feeding it, what your expected weight gain is on this feeding plan. Depending on their age and experience level, kids may get asked more detailed questions, such as the best place to give a sheep an injection.

One of the other things the kids have to be prepared for is the judge touching their animal.  Alesia Moore shows Isabel how a judge may feel around the middle of a sheep’s back to help him determine its thickness.  Alesia Moore offers Isabel some advice on using her body to brace against the sheep to help keep it from bolting when touched. There is a lot of information being squeezed into this last meeting before competition.

A few more passes around the mock show ring and a couple more tries lining up the animals and it is time to call it an evening. Friday afternoon will be show time.

Wednesday nights around the farm are casual. The 4-Her’s come in T-shirts, jeans and shorts and are prepared to get dirty. The day of the show is a different story. Jeans, boots and neatly pressed shirts are the norm. The kids look sharp as a group, with each one sporting a 4-H arm band on their sleeve. 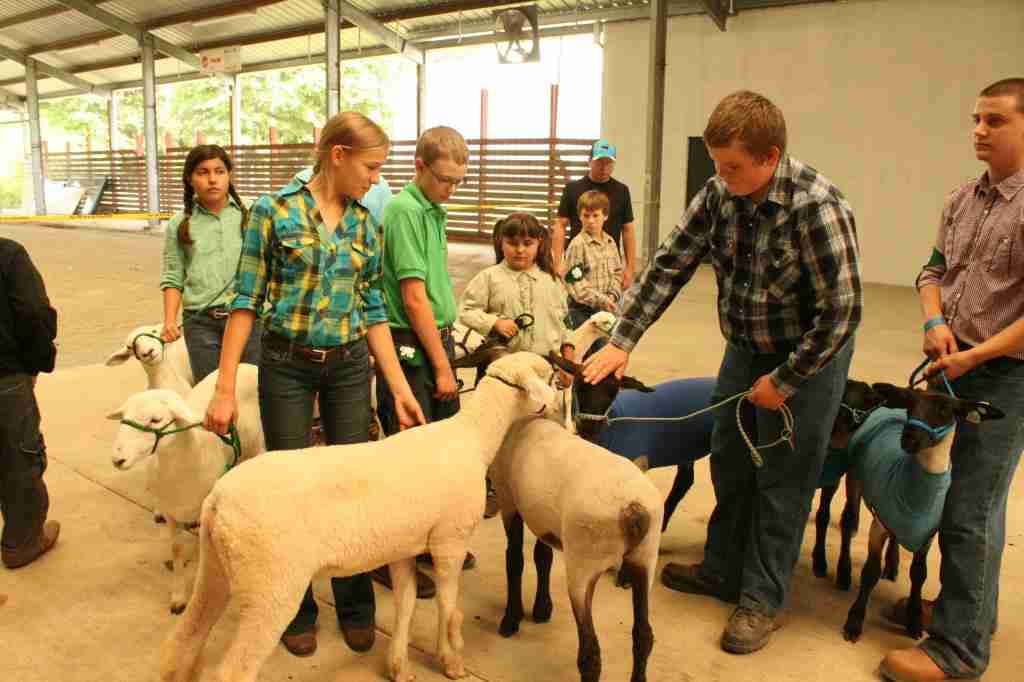 The 4-H group waits to go into the show ring at the Four County Livestock Show.

Emily and Isabel are waiting for their turn in the show ring, nervously brushing dirt off their sheep and talking back and forth. A few in the group are walking their sheep around around and around in a circle. Poor dizzy sheep!  Ted, Jacob and Joey — the veterans — are looking to see what other kids and  groups are at this show. When the kids head to the show ring, their faces turn serious. Eyes are focused on the judge and they are listening carefully to his instructions.

First up in the show ring are the Cloverbuds, kids ages 5-8. This is Sophia and Madison’s group and both girls head into the ring with their very cooperative sheep.  There is rarely any tugging or pulling to get Madison and Sophie’s sheep moving. Both sheep are pretty agreeable at the farm and at the show.  The Cloverbud group is a non-competitive class, so each kid earns a ribbon for participating in the show. The judge asks each child a question and offers them a word of encouragement and congratulations on their efforts. 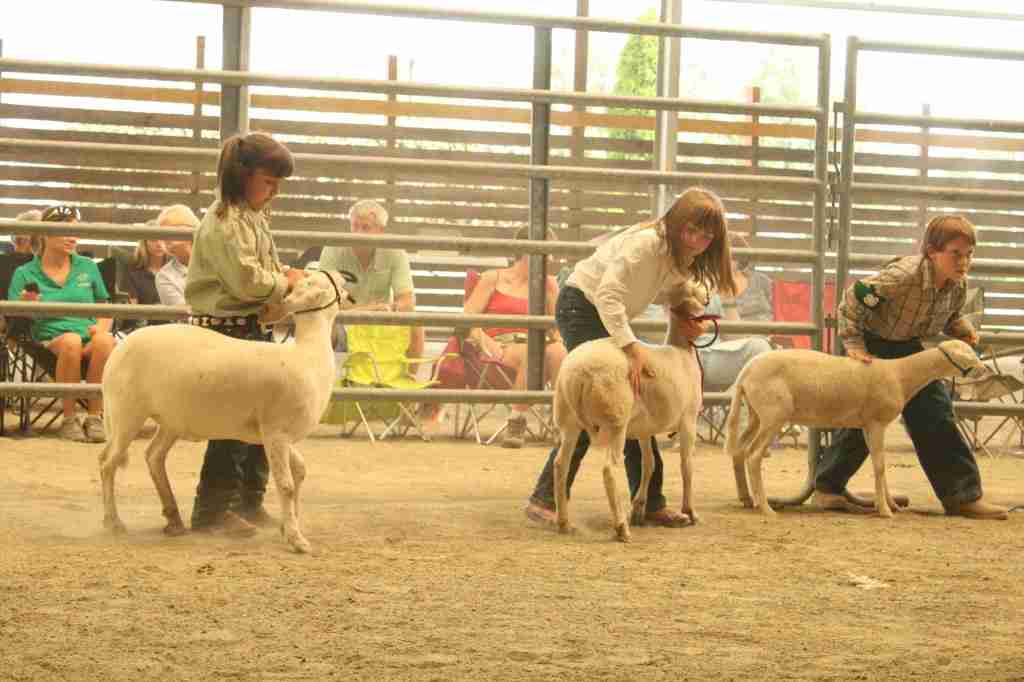 Sophia Nobles, left, and Madison Pippin, center, line up their sheep for the Cloverbud class at the Four County Livestock Show.

Next up are the juniors. Emily and Isabel will be competing against each other along with other 4-Her’s from neighboring counties.

One by one the kids lead their animals into the show ring. Walking slowly, trying to keep a good distance from the animal in front of them, but not allowing too much space.  “Walk them around to the right and then line them up side by side,” judge Brad Johnson said. Johnson, a livestock and dairy cooperative extension agent from Rowan County, gives each animal a good look as they walk around the ring. This particular class is being judged on showmanship, so the judge is looking at how the kids work with their animal, set it up to show and how they answer questions about the sheep.

Both girls remain calm, as do the sheep. The judge watches them walk, talks with each competitor and then lines them up from first to fifth place.

Emily pockets her first blue ribbon, in her very first show. She breaks into a wide smile and briefly celebrates the moment with her mom.  But there is another class to get ready for. The next class pits the first-timer against more seasoned competitors to claim the top showmanship award.

Cheves has been sitting ringside, watching as his grandsons and the rest of the 4-H kids step into the show ring. When Emily wins a blue ribbon for showmanship, Cheves springs up from his chair and comes over to congratulate her. “That’s a big deal, you just don’t know what a big deal that is,” Cheves said. “That award was for showmanship. She did great for her first time in the ring.” 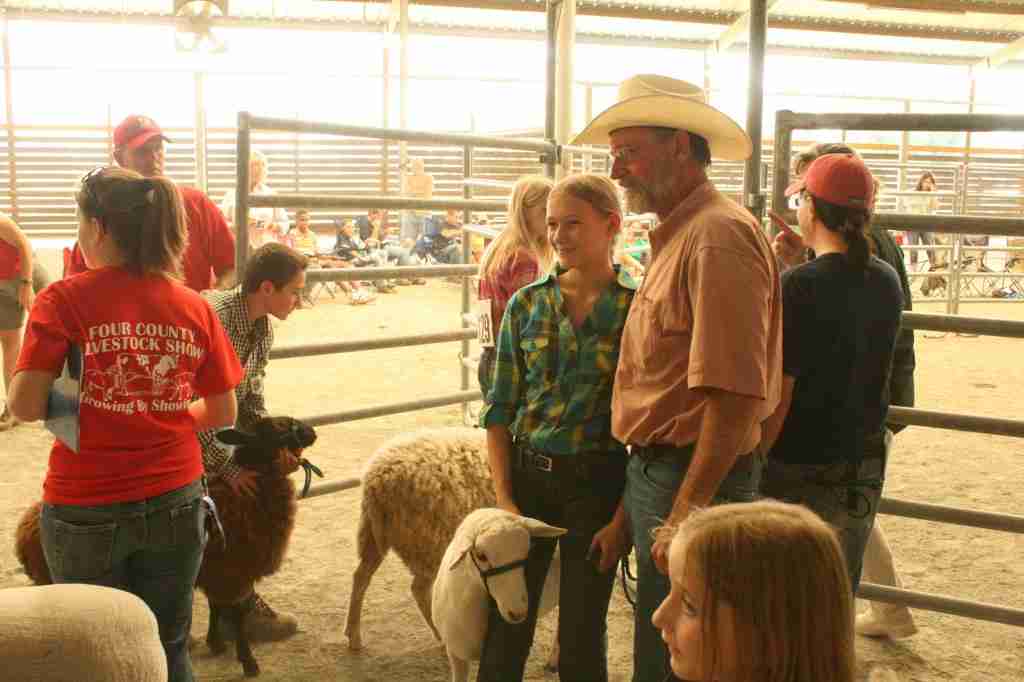 Carvel Cheves, right. congratulates 4-Her Emily Best after she takes a blue ribbon in her first sheep show.

Cheves is proud of the effort of each one of the kids at the show and what they have learned along the way. In a later class, Ted, Jacob, Joey, Emily and Isabel are all in the show ring together. It is a bigger class, with about 10 handlers and sheep in the ring at one time.

After the judging is complete, the kids and their sheep take first through fourth places and also sixth place in the competition.  It has been a good day for this group. At the end of the day, the kids collect 35 ribbons between them. 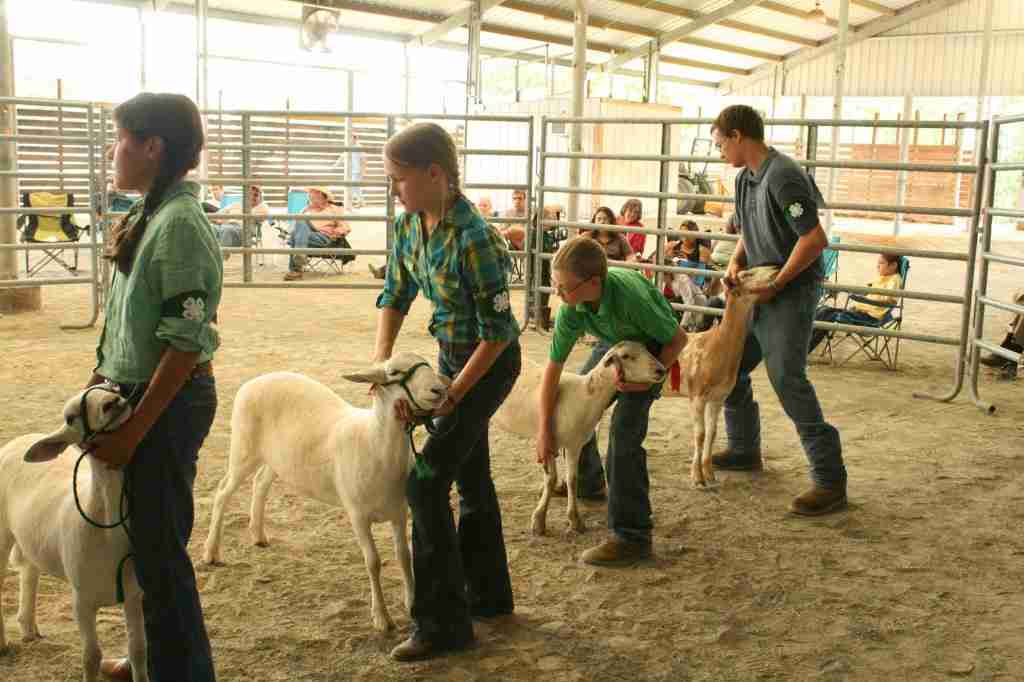 “All the credit goes to these kids. They have shown up, worked hard, have listened to what we have told them and it shows in the ring,” Cheves said.

Cheves knows that with another show under their belt, the kids will have more confidence in their abilities, and that’s part of what they are learning through this process. 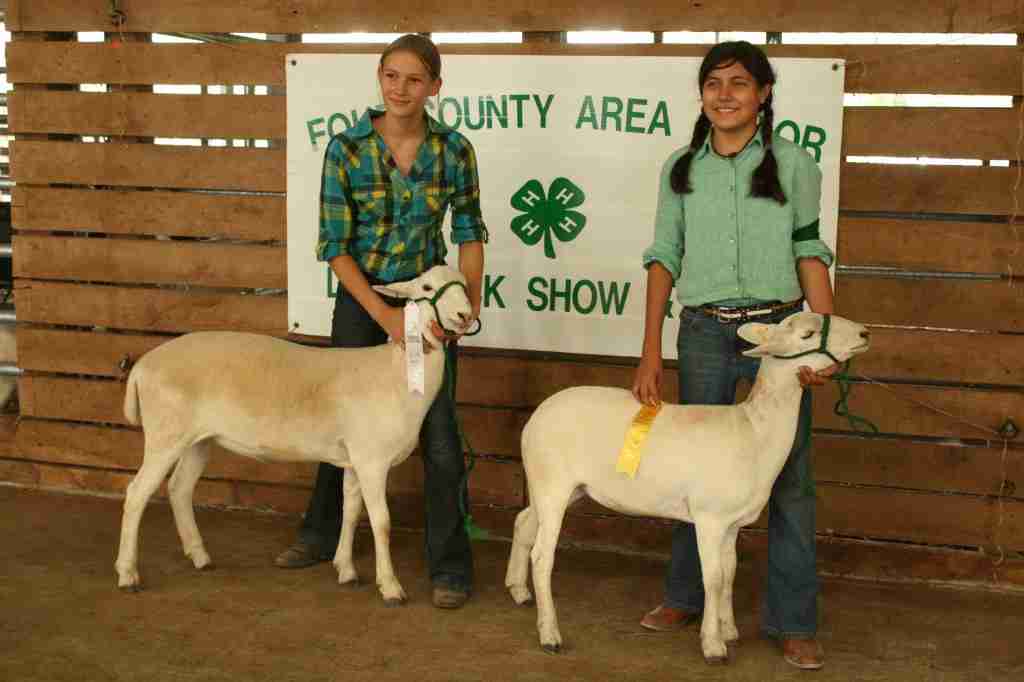 Emily Best, left, and Isabel Nobles, right, are all smiles after earning ribbons in their first livestock show.

“The kids were real happy and proud after the show. I told everyone I know about the show and how they did,” said Debbie Nobles, Isabel and Sophia’s mom. The ribbons Sophia and Isabel earned now proudly hang on a bulletin board at the family’s home.

This experience has fueled new interests for the girls.

“They had fun, but once the lady walked by with the cow to show, now they want to show other things besides sheep,” Nobles said, laughing. “They want their dad to sell the house and move to an area where they can have animals in their backyard.”

Next week’s post will focus on figuring out what the 4-Her’s learned from their first show and what they need to work on before the next one.