3 brothers and a goat named John 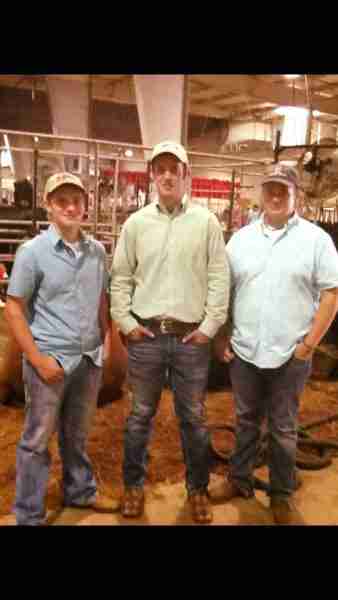 Meet the Henson brothers—Noah, Jesse, and Caleb. They live in the mountain town of Canton. Every year, they set goals for the season and do their best to achieve them. During last year’s fair season, they had a goal that revolved around a goat named John. They knew the goat was special, and they wanted to make sure he reached his full potential by the time he was shown at the N.C. State Fair. After hard work all season, it was time to walk in the ring with John. The only thing left was to hope that the judge thought the goat was as special as the Hensons did.

The Henson brothers agree 95 percent of the time. Only when constructive criticism comes up do they argue, but that typically results in a push to become better. Each brother has their strengths and weaknesses, too.

Noah, the oldest, typically finds himself coordinating most of the shows and making a schedule for show day. In addition, he has a knack for programming the livestock’s diet. However, Noah says he normally is the one who gets worked up and nervous and can run behind schedule because he gets caught up talking to people.

The next oldest brother is Jesse. He can really judge and evaluate livestock the best. The Hensons always get his approval before buying an animal. He is also the calm one, but his calmness can make him too laid back on show day.

Caleb is the youngest and the best showman of all the brothers. He can get the animals presented the best. His older brothers have to watch him, though. Caleb can get distracted by the fairer sex, or at least that’s what his brothers said.

Each brother has his own job, too. Noah’s job is to always make sure they have enough feed and animals are getting fed what they are supposed to. He keeps a white board in the barn explaining what each animal gets. Jesse keeps an eye on the animals to make sure they aren’t getting too fat for example. Caleb focuses on the training of the show animals and works on making sure their coat is pristine. As mentioned before, he is the one who shows the animals. Not just because he is the best at it, but also because he hasn’t aged out yet.

“If you ever look at him when he comes out of the ring, he will be dripping in sweat because he is working so hard in the ring to make sure the animal absolutely looks the best it can.”

Needless to say, the Henson brothers are a team. They use their respective strengths to balance each other’s weaknesses. During this past show season, they added John, named after their favorite goat producer, John McInnis, to the team. And while John had to pull his weight by exercising up and down a mountain and learning how to be a show goat, he had it relatively easy. The brothers would wash and blow dry him everyday, condition his hide, and change feed weekly. In short, John was pretty spoiled.

“A lot of hard work went into the project this year. It involved working the goat and its leg hair everyday and always keeping check on its condition to make sure it would be in perfect shape for the fair.”

When show day came, the Henson brothers could confidently say they had done all they could. While they thought John looked good and was special, it wasn’t their opinion that mattered.

“We knew we had done all we could to make sure this goat looked the best he could, so we just a had to leave it in the judge and the good Lord’s hands once he walked in the ring,” said Noah.

Caleb showed his heart out, and ended up in the champion class where ultimately the judge named John Grand Champion Market Goat and N.C. Born and Bred as John was born and raised in North Carolina.

“I was very surprised at the win. It is something I have dreamed about doing and it didn’t seem real when it happened.”

All their hard work paid off. Although, they were the only ones to bid on John in the sale, they saw something in that goat that others didn’t—a potential champion.

At the N.C. State Fair Sale of Champions, the win was made even more special when Caleb and Jesse were recognized as N.C. State Fair Livestock Scholarship recipients and Noah was able to say the opening prayer of the sale.

“That meant the world to me. Honestly I was as thrilled about getting the chance to do that as I was getting to send an animal through the sale. I love any chance I get to serve the Lord publicly and praise him for allowing us to be involved in an industry as great as agriculture.” 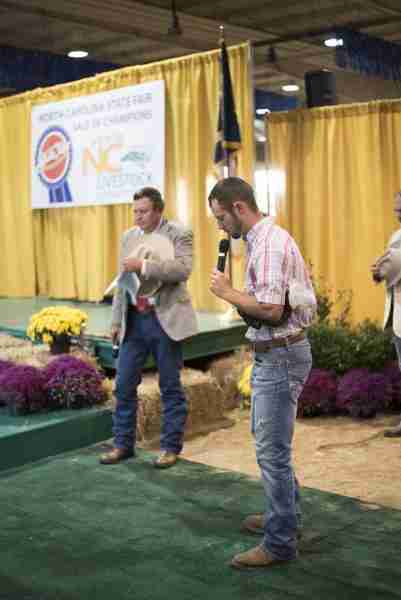 Noah leading the opening prayer of the Sale of Champions

This year, the brothers have new goals. Caleb wants to show one last time at the N.C. State Fair before he ages out, and you can bet his brothers will be right there supporting him. The Hensons have also set a goal to become show goat producers and start their own operation called Henson Brothers Livestock. 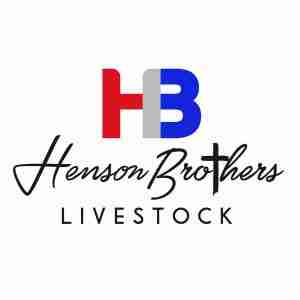 “We are striving to collect some of the most competitive genetics in the nation to have at our farm. We want to raise goats that not only will compete at the N.C. State Fair, but all up the East Coast and nationwide,” Noah said.

The Henson family has raised cattle for generations, and always shown breeding heifers. In 2016, they made the decision to try  goats. Noah’s college roommates had goats on their farm, so to contribute to any conversations they had, Noah figured he should try having a few goats around. Besides, they are just like miniature cattle, and have been a perfect match for the family.

Cattle will always be a passion for them, but they love working with goats.

“We are all aging out of showing, so we believe this will be the perfect avenue to still be involved in a passion that is dear to each of our hearts,” Noah said.

It is also a way for the brothers to stay close despite their differing schedules and lives. Jesse is in school at Oklahoma State University and is on their livestock judging team. Caleb is in school at Haywood Community College, and Noah got married and started a new job as a livestock agent for Buncombe, Henderson and Polk counties. This doesn’t stop the brothers from being a team and working together.

Caleb put it perfectly when he said, “Working together as a family means everything. There is no tighter bond than what we have as brothers and we definitely wouldn’t be where we are if it wasn’t for family.” 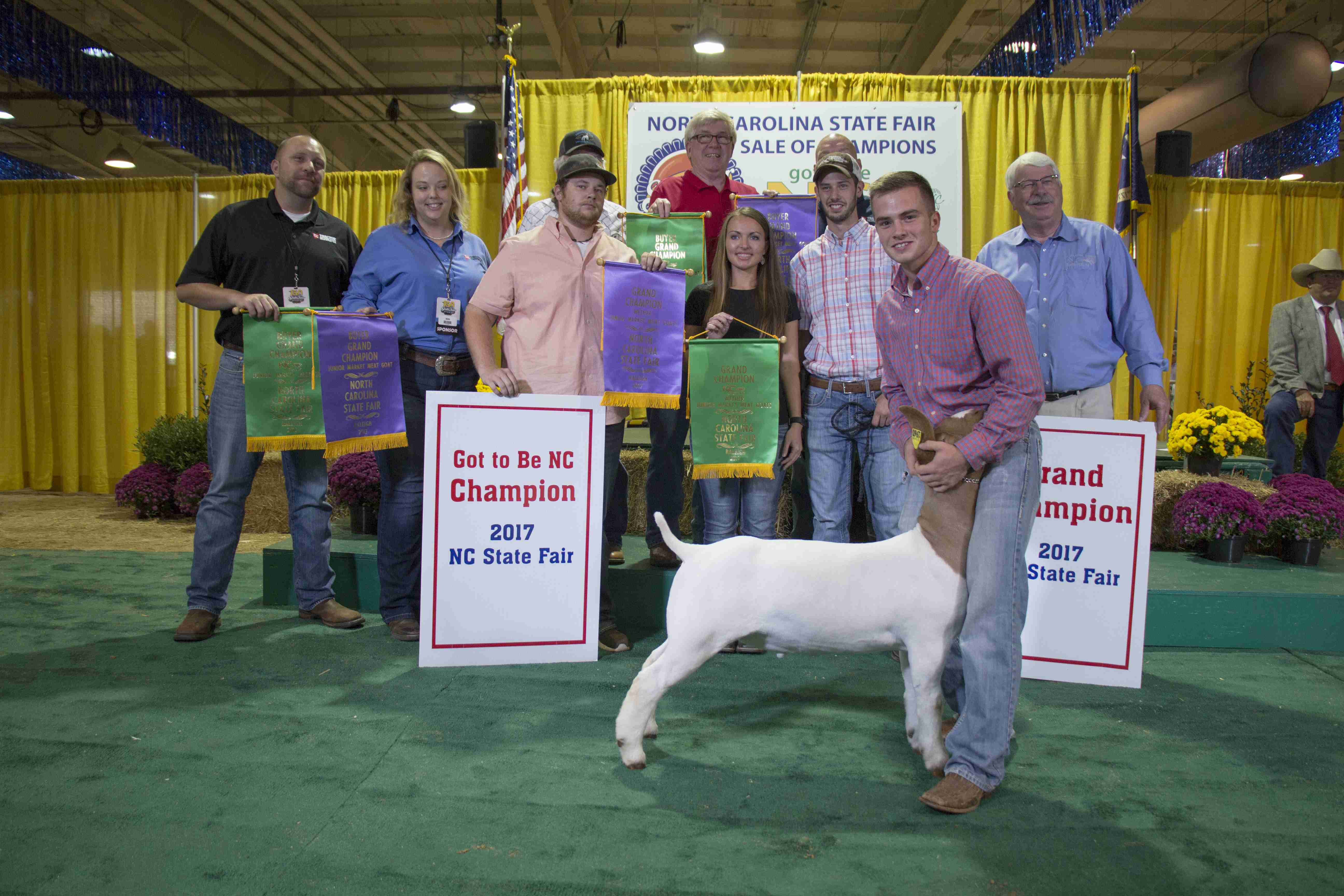