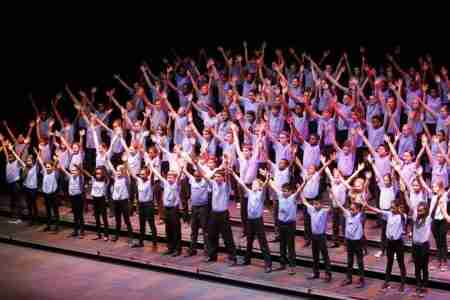 Brogden Middle School Chorus will be among the 19 groups performing in the first Choral Competition.

Dorton Arena has hosted many legendary performers, including the Supremes, Johnny Cash, Willie Nelson, KISS and Prince. Adding to this list of performers will be 19 local middle and high school choirs that will compete in the N.C. State Fair’s new Choral Competition on Thursday, Oct. 13.

“We decided it would be a great fit for one of the concert events in Dorton,” said Denise Walker, competitive exhibits director.

“As a former music major, I know how much musical opportunities in school meant to me,” Walker said. “This competition will help showcase talented musicians in our schools, and the need for continued music education support.”

Each choir has seven minutes to perform two songs. A panel of three judges will evaluate the choir’s musicianship, stage presence and choice of music, and winners will be announced at the conclusion of each competition. The event is free with paid fair admission, and will be general seating.

“I try to give kids as many experiences as possible outside the classroom,” she said. Her choirs have performed at a Charlotte Hornets basketball game and Busch Gardens in Virginia. Now they can add the N.C. State Fair to the list.

She wants her students to know that they are at the competition to improve their skills, not just to win.

“As long as they’ve done their best, we’ll be happy with whatever results we get,” Huber said.

The choirs registered on a first-come, first-served basis in May. See below for the list of competitors.

I'm Wildflower (a.k.a Evie Fordham), and when the middle of October rolls around every year, you'll most likely find me strolling through the gardens, admiring the blue ribbon flowers, and sipping on lemonade at the State Fair. I'm having fun as a summer intern writing and researching about this North Carolina tradition!
View all posts by Wildflower →