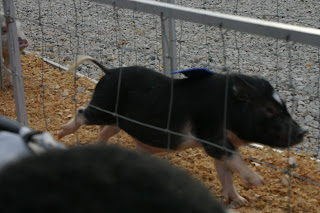 Can you believe it? 265 days down, and only 100 to go until the 2008 State Fair. To celebrate, here’s a look at some of the other numbers associated with the state’s biggest gathering of food, rides, animals and N.C. agriculture. . .

60 – Years of the Folk Festival

$70 billion – The amount of money the N.C. agriculture industry contributes every year to the state’s economy